I have been resisting the 2019.2 update because there were some issues with it originally, plus the forced upgrade of Dynamo. I decided to go ahead with Revit 2019.2.1 Hotfix today. I think that the forced Dynamo update occurred with the 2019.2 major point version, but 2019.2.1 seems to install without forcing the Dynamo upgrade – on my machine, Dynamo 1.3.4.6666 was not updated during the 2019.2.1 hotfix installation. Here are the links:

Improvements to the functionality. For more information about these improvements, see the What’s New section of the Revit 2019 Online Help.

If Revit 2019 and Revit LT 2019 are installed side-by-side and the 2019.2.1 Hotfix is only applied to one of these products, a “Could not load type ‘Autodesk.Revit.DB.ICloudExternalServer’ from assembly” error will be displayed when launching the non-updated product. To alleviate this error, make sure to apply the 2019.2.1 Hotfix to both Revit and Revit LT in side-by-side configurations.

Over at Virtual Built Technology, we have an aspirational view of our industry – that together, we can arrive at a set of best practice workflows for BIM and VDC projects.

We have been developing and refining our own set of internal workflows for a number of years, and today we would like to start sharing those with the world.

We will periodically post best practice workflows in the Resources menu on our site.

From here you can browse to various resource types, including:

The individual resource pages are also fully Disqus comment enabled, so you can start a conversation there. Let us know if you think we are on the right track… or not 🙂

Also, from anywhere on our website you can immediately contact us using the Intercom badge at the bottom right of the screen – it looks like this:

Click on it anytime and let us know if you have any questions or suggestions, or would like assistance with your BIM and VDC projects.

We look forward to engaging with you soon!

so you might have noticed, we released a number of fixes for Revit versions. These are important fixes to address security issues and to ensure your product keeps working as you expect. Check out the read-mes for more details. https://t.co/rLGfi9aihM – this will be updated too

Details and direct links related to the above are provided below:

In unrelated news, latest Autodesk Desktop Connector can be downloaded at this link 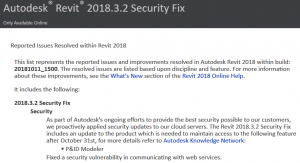 I’m sure you are aware that intellectually Revit shared coordinates take minutes to explain, but emotionally they take years to master 🙂

I’ve been looking for a way to check and validate coordinates using the Revit API. One method I implemented in VirtualBuiltApp is to gather Grid Intersection coordinates and compare those, but obviously you need a federated model with links to achieve that comparison.

One interesting fact to note is this:

If we put this another way:

A GUID-based relationship is set up between the files. Setting up the same relationship has been possible via the API via Document.AcquireCoordinates() for a few releases.

With 2018’s SiteLocation.IsCompatibleWith() it is also possible to identify if two coordinate systems are the same.

This is part of a long thread between Dale Bartlett, Jeremy Tammik, and the Revit development team. 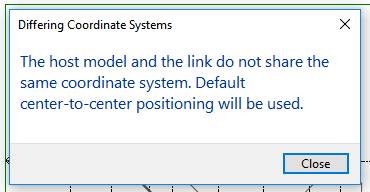 Also, keep in mind that BIM 360 Design (Revit Cloud Worksharing) does not support Publish Coordinates. Only Acquire Coordinates can be used in that environment.

If you have Desktop Connector installed, you probably realise you can ‘upload’ Revit models and other files to BIM 360 Docs by dragging and dropping to the folder in Windows Explorer (using Desktop Connector). However, when you try and link this using the BIM 360 shortcut in Revit, you might not be able to see the file…

Here is a workaround that may allow you to link a non-initiated Revit model into your Revit file:

You should get the BIM 360 prefix in Manage Links:

Here is another short video of this process here (no audio, copy-paste directory from Windows Explorer method):

The first point release of Revit 2019 is now available… Let the deployments begin. Your projects are now running out of excuses as to why they shouldn’t upgrade 🙂

Here are some direct links to the Revit and Navisworks update files. 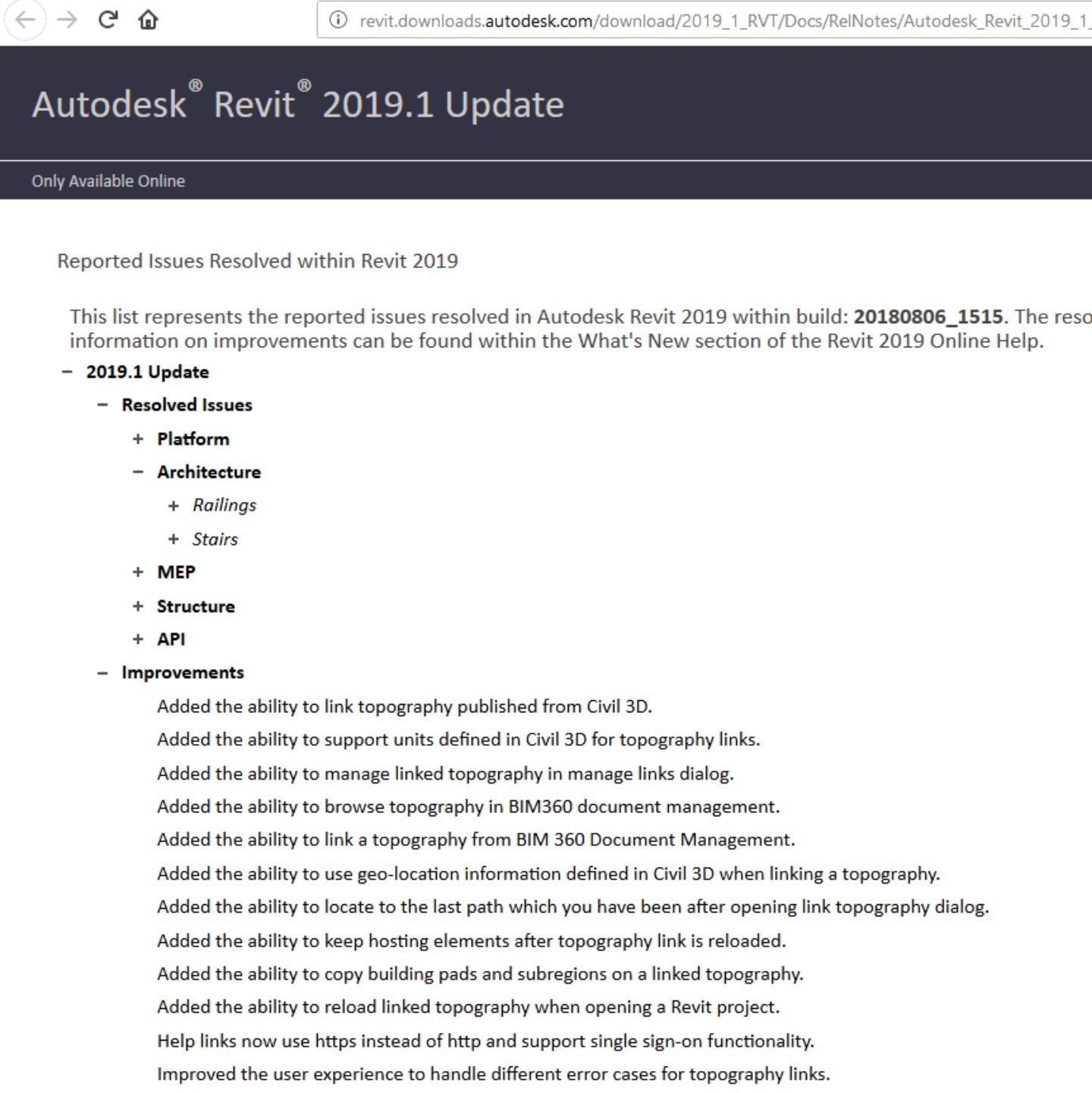 In the new homepage for #Revit 2019.1 when you hover over a recent project, you get the path of the central, your local, and the file size! If it’s not workshared, then you get the filepath and size. Pretty sweet.

If you Close All Worksets when opening a model on BIM 360 Design, you may get this error (related to Project Info):

Can’t edit the element. It was deleted in the Central Model. 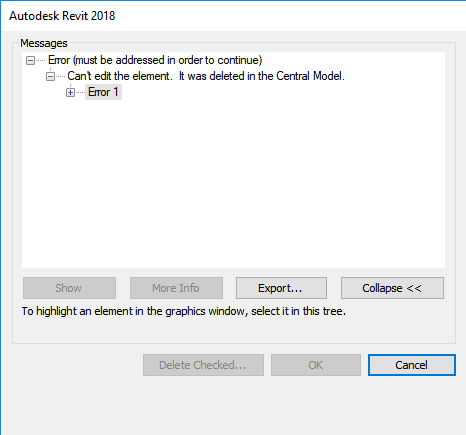 It appears to be some synchronisation bug or similar, possibly related to BIM 360 cloud worksharing. You can force the error to reappear by clicking on the Location option in the Ribbon

To fix it, try doing a full Sync with Central. It seems that this rectifies the bug for that session and future sessions with that particular cloud workshared model. 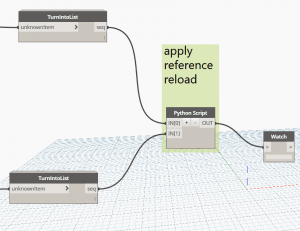 At Virtual Built, we typically create a federated Revit model for every project we work on. This allows us to run a host of automated processes on the links, right from the federated file.

Recently we received a dataset for a high rise building. The Architect had used 5 typical linked ‘module’ files, copied throughout a master file.

This works fine, but in this models there were also nested consultant links inside the Architectural linked modules. So we have:

Federated Central file -> Everything else (no nested links)

It is a bit hacky, but here is how I went about it. For each module file:

After populating the detached Federated Central file, we just need to Bind and then Copy / Paste the free instances:

The only thing we technically ‘broke’ or lost in this process is the module link->nested link relationship. So if someone decides to move one of the nested links in the module link, obviously that won’t replicate into the Federated Central file.

Hope this helps some of you out there building or dealing with large federated models.

This hotfix corrects an issue with non-English languages where the PnID Modeler functionality did not load correctly after appling Revit 2018.3 Update.

Some notes from readme below…

Additional software applied by this update

With this install the following will be updated: Revit 2018, Collaboration for Revit 2018, and Dynamo. The updated version of the Dynamo Revit add-in does not include a desktop shortcut and can be accessed from the Visual Programming panel found on the Manage ribbon tab. If multiple versions of the Dynamo Revit add-in are installed, a dialog will prompt you to select which version to launch.

Known Issues with applying the update.

After this update is applied, attempts to uninstall Revit 2018 using the Autodesk Uninstall Tool may become unresponsive during the Dynamo Revit uninstall process. To avoid this problem, uninstall Dynamo Revit first and then continue with the uninstall of Revit 2018.