Its good to see that IFC for Revit development is continuing… This post shows how you can download and install the new version, along with detail on what has been updated in this version. 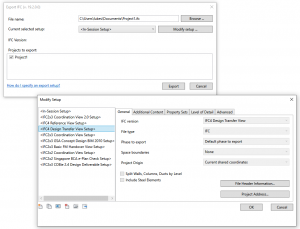 Here is a list of fixes from the Release Notes:

General:
• This is generally a bug fix release with some new IFC functionality.

Export Bug Fixes:
• Consistent ExportAs entity and its PredefinedTypes
• Export fails when there is no associated Plan View to a level
• Additional fix for error getting 2D data when there is no Level associated to the FamilyInstance
• Various fixes related to missing geometry and export failures
• Fixed performance issue in IFC2x3 export due to error in creating types
• Fixed issue with slanted Pile
• Fixed issue related to element that is split into parts
• Improvement in handling level of Part Override
• Some improvements on classification (issue #31)
• Improve voiding of IfcMappedItem representation (issue #9)
• Fixed issue on Composite curve tolerance (issue #5)
• Fixed issue where element is still exported even though it is set to not-exported in the mapping table
• Bugfix for incorrect cylindrical hollow core Beam export in IFC4RV
• Fixed for issue #51
• Bugfix based on Pull request #52 for MEP connector, and a few clean-ups
• Fixed minor issue to ensure generic element exporter will generate consistent GUID for the instance
• Fixed issue when OverrideElementContainment is used but the Site does not have site geometry (from Topography surface)
• Add support of OverrideElementContainment also for SpatialElement (Room/Space/Area). This enables export to place IfcSpace directly to IfcSite for example, which is useful for outdoor spaces
• Refactored the handling of valid entity and type and fixed a few defects related to it (Github issue #68)
• Fixed issue with Stair Landing that is offset far away from the supposed location
• Fixed issue with missing geometry when assigning IfcExportAs to the Spatial Element (Issue #23) However, in IFC4RV or DTV, there is a fixed list of valid entities that will be enforced, entity such as IfcExternalSpatialElement will be exported as IfcBuildingElementProxy.
• Fixed performance issue when there is a large triangulated geometry for export to IFC4RV
• Fixed issue of exception raised during export when “Export schedules as property sets” option is selected, and the model contains ViewSchedule from the template
• Update Source/IFCExporterUIOverride/IFCExporterUIWindow.xaml.cs (issue #59)
• IFCBooleanOperator.Union don’t work! (issue #32)
• Fixed issue in exporting IfcBuildingElementProxy that assigns an invalid enumeration for CompositionType in Ifc2x3 export
• Fixed issue related to opening that cuts through multiple walls (note that this is not yet 100%. In some cases, due to the extended body of the opening (that is defined in the native code) there may be more cut than it should for a few cases
• Fixed issue with changing GUID of Window or Door when it is in the context of the opening that cuts multiple walls (issue “IFC Guid on family” in SourceForge)
• Fixed IfcWindowLiningProperties, IfcWindowPanelProperties GUID issue
• Improve handling for multiple meshes in a tessellated geometry that causes missing some surface body.
• Fixed issues of UserDefined propertysets that fails to recognize the Pset assigned to a Type. Also improve the handling for Conditional Pset (by PredefinedType)
• Fixed regression issue #70 missing toprail for IfcRailing on export
• Fixed issue with “runaway” flex duct with “Keep Tessellated Geometry as Triangulation” option selected (issue #58)
• Fixed regression issue (issue #96) IfcZone ObjectType not exported
• Fixed issue of Naming override/default value, and issue of Qto_ properties are not exported
• Fixed issue on a wrong enumeration for the SweptArea (it was set to .CURVE., should be .AREA.)
• Fixed for orphaned entities and wrong footprint information due to incorrect projection direction for IFC4RV requirements. IFC4RV Beam (Arch) is now without error in the automated test
• 1st fixed for issue related to runaway parts in “export only elements visible in view” (there are still situations that may cause a wrong rotation, but the test case reported in issue #86 so far looks good) 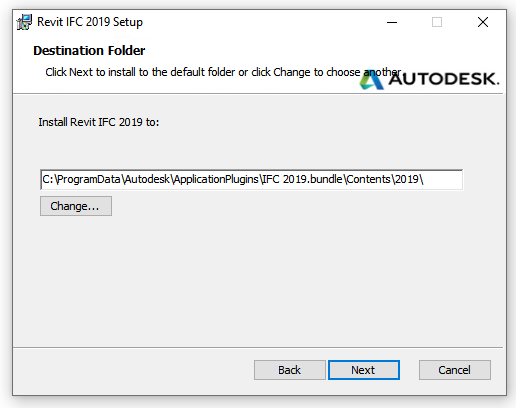 New Export Functionality: – Allow creating formulas in Revit parameters that will export to IFC. Details upcoming in the Wiki.

The excellent and open-source IFC extension for Revit (previously known as IFC Exporter) has been updated. Please see below for download links and update details. 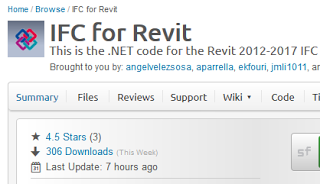 Readme details for the latest release:

General:
– Minor improvements to the Importer class to make it easier for developers to create a custom Importer.
– We now support the IFC4 Addendum 2 schema.  Specific improvements based on that will be listed below.  For this update, you will have to manually add the IFC4_Add2.exp file (included with this package), to the EDM subfolder of your Revit Program folder.  We will automate this in a future update.

New Export Functionality:
– Allow overriding material names on export by using IfcName shared parameter.
– Expand the use of types for many elements that didn’t export types before, including beams (IfcBeamType), curtain walls (IfcCurtainWallType, and types for mullions and panels), and footings (IfcFootingType).
– Improved ability to export some geometry as IfcSweptSolid.
– Try to use axis information, if it exists, when exporting beams and members in addition to columns.
– (IFC4) Better support beam, column, and member base quantities, including weight.
– (IFC4) Collect material information for profiles for beams and columns.
– (IFC4) Expand use of FootPrint representations to columns and slabs.
– (IFC4) Expand use of IfcMaterialLayerSetUsage if the entity has a compound structure in Revit, as allowed by IFC.
– (IFC4) No longer create StandardCase IFC entities, as these have been deprecated (including IfcWallStandardCase).
– (IFC4) Support IfcMaterialConstituent and IfcMaterialProfileSet for a number of elements.
– (IFC4) Use Built-in parameter “Structural_Bend_Dir_Angle” to get “Roll” property for PSet_BeamCommon and PSet_ColumnCommon.
– (IFCAdd2) Support IfcPolygonalFaceSet.

Export Bug Fixes:
– Allow exporting to IFC while using Collaboration for Revit where the default directory isn’t local.
– Better support for MEP type entities, that didn’t always export correctly.
– Correct the parameters of the directrix of some IfcSweptSolids.
– Fix correct mapping of IfcBurnerType/IfcGasTerminalType and IfcElectricHeaterType/IfcSpaceHeaterType.
– Fix creation of types for sub-entities of IfcDistributionControlElement.
– Fix offset problem when using the “Export Linked Files as Separate IFCs” option in locales where the decimal mark is not a point.
– (IFC4) Correct names of IFC4 entity quantity sets.
– (IFC4) Fix the name of IfcCommunicationsApplianceType.

Import Bug Fixes:
– Better reporting when importing an IFC file with invalid rectangular or circular profiles (e.g., a 0 radius profile).
– Don’t show the void geometry when subtracting a void from an empty solid as a result of an IfcBooleanResult calculation.
– Ensure that IFC2x schema files can still be imported.
– Fix import of some IfcSurfaceCurveSweptAreaSolids.

Details:
New Export Functionality:
– Append “(Type)” to all internal Revit type property sets, to avoid having multiple property sets with the same name assigned to the same IFC entity.
– Changed how the classification code is parsed so that classifications can have brackets and colons in them.
– “Extra Low” level of detail now applies to all faceted BRep geometry, allowing many more files to export without hitting the size limit.
– If a user–defined property set contains the same property name more than once, take the last non–empty value (don’t duplicate the property name).
– Rebar elements can generate up to 1024 consistent GUIDs for individual IfcReinforcementBars, up from 256.
– (IFC4) Zones can now have a long name, set by the “ZoneLongName” shared parameter for non–MEP zones, and the “IfcLongName” parameter for MEP zones.

Export Bug Fixes:
– Don’t create orphaned IfcStyledItems.
– Don’t export invisible geometry in beams.
– Export DirectShapes of Walls category.
– Export elements with empty custom classification field values.
– Floors exported as IfcSlabs correctly report if they are load bearing or not, using either the “LoadBearing” shared parameter or the Structural built–in parameter, in that order.
– Improve performance in certain cases where we can’t create a valid tessellation for a face.
– The “Use active view to generate geometry” option now works correctly.
– (IFC4) Correct the orientation of some IfcAdvancedBRep faces.

Import Bug Fixes:
– Fix how the IFC GUID is set for certain elements.
– Fix the orientation of some imported objects where part of the local placement needs to be calculated.
– (IFC4) Read in some missing relations caused by “IsDefinedBy” split into 3 inverse attributes.