Hey, I know we sometimes can’t agree on things like OpenBIM and Revit Vs ArchiCAD and Shared Parameter Standardisation…

But let’s all agree never to use Detail Lines as Grids, ever again, ok? (You know who you are…)

When working with multiple linked files, you can utilize the ability of Revit to close Worksets in Linked Files, and in some cases this is a good visibility shortcut. Along these lines Simon over at BIM42 has written “a few line of code for set up every Scope Box, and Reference plane to the correct workset…” 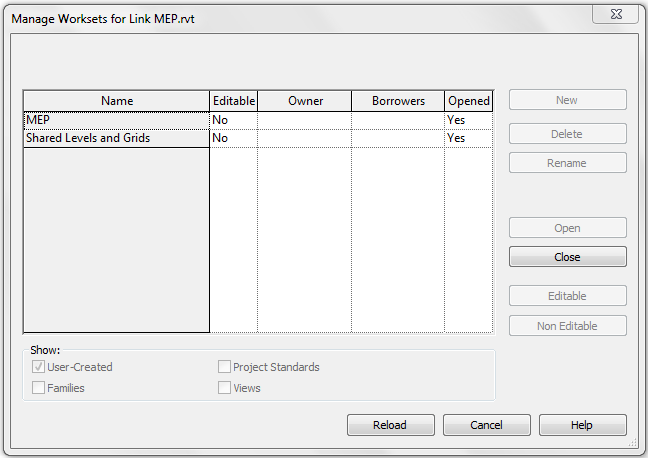 See the code at:

The standing rule with linked datums is that if they intersect the view cutting plane, they should show up in the host. However, Matthew Nelson discovered an interesting inconsistency – for Plan Views, this doesn’t seem to apply when Scope Box has been added to Grids.

In other words, the Grids in the Linked project, when applied to a Scope Box, do not seem to show in the Host project, even if the Host plan view range intersects the Grid elements.

After some experimentation, including testing on Revit 2013, 2014 and 2015, I think I have found the solution:
If the Scope Box in the Link intersects the Level in the Link with the lowest Z value (the lowest level), then that Scope Box and any associated Datum (Grids and Reference Planes) WILL appear by default in the Host.

Got it? So this won’t work:

There are 3 other ways to show linked Grids in a plan representation, even if you can’t modify the linked Scope Box as I describe above:

Here are those workarounds:

Ah, the simple option is often best.  Just close the Workset that has Levels and Grids on it in the Manage Links dialog.  See image: 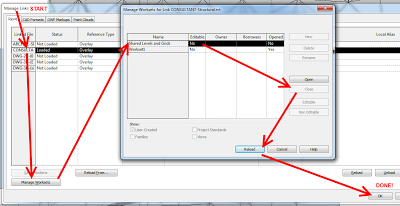 Idea from this post on Revitize (it uses language related to older Revit versions):

and select the same linked structural file. Before pressing ‘open’, select the small arrow next to the ‘open’ button:

If for some reason you want to see the structural grids, you can repeat the steps above to make them visible.

Nice post over at  revitstructureblog.  A couple of highlights:
When working with Radial grids you will typically find a couple of problems. The first issue you will find is that the grids will not show on new levels. This is because the grids need to be elevated to cut through the levels and a grid is not shown unless a view is perpendicular to the grid as shown in the image below.

…
A new feature of Revit 2013 is the ability to create a continuous grid line with the same reference called a multi-segment grid. The grid is simply drawn with a series of lines and arcs and then when the sketch is finished the grid is created. It is worth noting that the grid cannot be controlled with a Scope Box (Covered Below).

Sketch stairs can be added to an Assembly, but Component Stairs can’t…

Multi-segmented grids:
To create a multi-segmented grid, select the Multi-segment tool in the Draw panel of the Modify|Place Grid context tab.  This will enable sketch mode for you to draw the grid line.  This will work on linear and radial grids or a combination of lines and arcs in the sketch, but must be a continuous segment.
http://blogs.rand.com/support/2012/03/revit-2013-miscellaneous-improvements.html