Konrad and Mostapha are working on something, and the functionality does not look shrimpy at all. Check it out:

“Mantis Shrimp is a Dynamo (Revit) and Grasshopper (Rhino) interoperability project that allows you to read Rhino’s native *.3dm file type as well as export geometry from Grasshopper. It is written in Python in form of a user objects (on Grasshopper side for exporting) and custom Python nodes (on Dynamo side for importing). It’s an OPEN SOURCE project with all of the source code available on GitHub. At the moment it’s a collaboration project between myself and Mostapha Sadeghipour.

Here’s how to get started with Mantis Shrimp…”

Read the rest at:
mantis shrimp – getting started… | archi-lab

This is a Geometry Gym demo, showing the use of the baketoifc and importifc tools:

I have many times posted about the work of Jon Mirtschin / Geometry Gym (here for example).

Along similar lines, check out this project:
http://www.grasshopper3d.com/forum/topics/grasshopper-to-native-revit-elements

With Mario Guttman involved, it must be taken seriously…

It seems that more and more people are trying to move intelligent data from Grasshopper to Revit.  There are at least 3 different ways to do this:

Have you tried all three?  Which worked best for you?

You may also be interested in:
Rhino to Revit with Hummingbird | WhiteFeetTools

A recent and very informative post from LMNts describes their experience in moving data from Grasshopper to Revit.  Here is just one paragraph:
Chameleon appeared a few months ago and has proven to be an effective tool for adaptive components. The interface is intuitive on both the GH and Revit sides and we are yet to find any serious bugs with it. Another recent plugin is named Hummingbird (keep track of all these animals), a similar program which accesses the WhiteFeet Modeler to import adaptive components as well as Revit primitives (this has a lot of potential and will be discussed more in a future post). Take your pick, these are both great plugins. 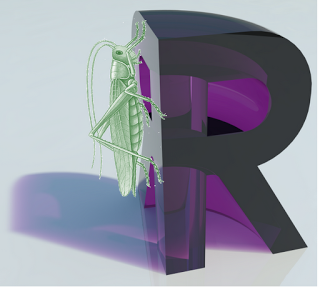 Note – the awesome glass Revit logo is from here – you can download it and use it as a desktop.  The grasshopper is from here.

A lot of you may have heard about it already, but if you haven’t:
Chameleon is a plugin for both Grasshopper and Revit with a focus on interoperability, simulation, and efficient practice workflows. Chameleon’s main advantage is its ability to facilitate easy transfer of geometric data between Grasshopper and Autodesk Revit, but also includes other valuable tools to make life easier, both in Grasshopper and Revit.

This latest version includes upgraded the functionality of the Curtain Grid management tools for Revit users. These tools now allow control of curtain panels in addition to the grids and mullions. There is also a preview to show the results of changes before accepting.
via
CHAMELEON � HIROSHI JACOBS

Nathan Miller strikes again:
I am creating a strange ‘catenary’ surface with Kangaroo and Grasshopper.  I am then feeding the information into an Excel spreadsheet and reconstructing the shape using Adaptive Components via RevitPythonShell.  Note how I am also able to adjust the radius parameter of the pipe members within Revit to reflect the ‘force’ diagram created in Kangaroo. 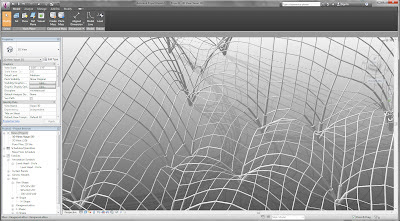 importing IFC2x4.  Thanks to Geometry Gym, and Jon Mirtschin in particular, an IFC importer add-on for Revit 2012 is under development that aims to support IFC2x4 with nurbs profile / perimeter exchange.

Jon says:
I’m developing the Revit addon to import these files as the functionality is not available in the native importers. I haven’t built for Revit 2013 yet, but if you have Revit 2012 and want to try, the installer is available from http://www.geometrygym.com/downloads
via the comments at:
Geometry Gym: NURBS GH to Revit

And here is the link to the current build of the IFC 2×4 importer for Revit 2012:
ggRevitIFCx64 v0.0.11.msi (24th April 2012)
Note, Revit 2012 64 bit Addon to import IFC files.
This is an early public release for initial feedback and comment. Addon undergoing rapid development. Please use with care and send suggestions and observations.
(from http://ssi.wikidot.com/downloads)

Geometry
Additional entities are added to the geometry resources. (1) The definition of manifold boundary representation has been enhanced to include advanced B-reps, based on NURBS. Therefore b-spline surfaces and b-spline curves are added. (2) The curve bounded surface based on bounding p-curves (curves defined in the parametric space of a surface) is added to allow any surface to be bound; it was restricted to only planar surfaces before. (3) Tapered solid of extrusion and tapered solid of revolution are now included to define simple taper, restricted to one section and to topological similarity of the start and end profile. (4) A fixed reference swept area solid is added to define an advance sweep along a directrix with a fixed orientation of the profile. The swept disk solid has been simplified by implicit start and end points on the directrix. (5) Elementary surfaces have been enhanced by incorporation or cylindrical surfaces.

“As a key component of this, I have added a lot of content to my program lab. The page includes a growing collection of scripts. My focus right now is on documenting code for RhinoCommon and Grasshopper that I think may be useful in scripting workshops. Processing and Revit code is also sprinkled throughout.
I am also releasing The Proving Ground plug-in for Grasshopper.”

DesignReform have recently posted a series of videos on Computational Design.  You can browse all videos related to Rhino at the following link.
DesignReform – Learning – Rhino

Here is a link to the first in the Computational Design series:
Intro to Comp. Design – 1.1 Curves and Lines
This is the first video in a series of our Introduction to Computational Design class.  We will start out with Rhino and Grasshopper and get into Python scripting.  Session One is an introduction to Rhino.  In this video we set up a framework of Curves and Lines to use as a structure for exploring the basics of Rhino geometries.
Media files Caseinc-11CurvesAndLines697.mp4

If you are particularly interested in Grasshopper, check out the series starting at 2.1:
Intro to Comp. Design – 2.1 Installing Grasshopper
We start off by installing the Grasshopper plug-in to Rhino.
Media files Caseinc-21InstallingGrasshopper516.mp4

Using Firefox and Downthemall, I could quickly download all of the *.mp4 files from the following feed address:
Direct link to feed