Orbit Downloader recently brought our LAN to a halt.  Where we should have been getting 2.2 mbps, we were getting 0.15 mbps.  I eventually performed an isolation test along with some bandwidth tests.  As soon as the offending PC was plugged into the LAN, the internet speed immediately dropped for all LAN users.  Very nasty.

To turn it off, open Orb preferences and untick this box: 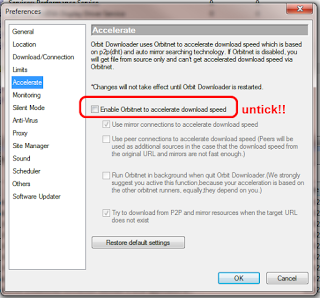 Soft2base has an auto-updated catalog of free softwares, it will highlight outdated or missing applications and propose to download and install them in a single step.

Along similar lines, I have previously posted about Ninite

You can use this link to convert the Itunes page into an XML link for use in a normal RSS reader:
Podcast URL Extractor

Merge the applicable registry settings after downloading them from the page below:
Folder View Settings – Reset All to Default – Windows 7 Forums

The Easiest, Fastest Way to Update or Install Software


Just pick your apps and click Get Installer. Ninite does the rest — fully automatic.

Ninite – Install or Update Multiple Apps at Once

Are you looking for a Free Partition Manager program (for Home use?)

Check out the link below:

After installing, just right-click on any file and select ‘Create Checksum File…’, then open the .md5 file that was created.

What is Hash or MD5 checking?
A cryptographic hash function is a deterministic procedure that takes an arbitrary block of data and returns a fixed-size bit string, the (cryptographic) hash value, such that an accidental or intentional change to the data will change the hash value. The data to be encoded is often called the “message”, and the hash value is sometimes called the message digest or simply digest.

Basically, when you download something important off the Net, it lets you know that the file has not been corrupted or modified in some nasty way…

I have been experiencing some Event 1030 errors, and the ‘Details’ tab in the Event Viewer shows the following:

To correct this, I have tried removing the stored usernames and passwords (on Windows Vista), using this technique:

This information was found at:
http://www.techmixer.com/remove-stored-username-and-password-on-windows-vista/