After selecting an Import instance, you can choose to Full Explode or Partial Explode.  Most users realise that exploding is a bad idea, and it can get very messy.  In fact, a number of experienced Revit users feel that you should NEVER import a CAD instance, always use Link.
In any case, the main difference between a full explode and a partial is this:

Wouldn’t it be nice if we got an update version of the Revit Families Guide?
Well, sadly, we don’t have it yet.

I don’t know about you, but I would love an updated Families Guide for 2011.

Some of the information in this guide is invaluable. I have actually requested that Autodesk put together a comprehensive guide relating to Revit Categories (SR# 1-9298685321 – The help file does not describe the unique properties of each Category).

Here is an example of the information in the 2010 guide (this is copyright to Autodesk obviously): 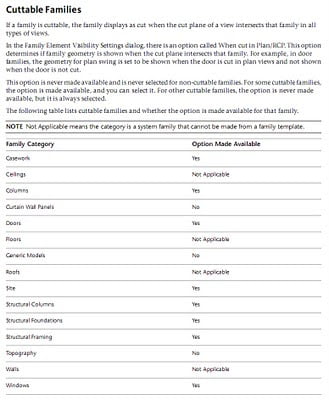 EDIT In Revit 2012 and newer, the quickest way to identify paint is to use the Remove Paint tool.  This does not load the Material selection panel, and will thus be faster.  Also, switch 3D view to wireframe with Remove Paint to globally scan the project with your cursor for painted surfaces…

To find out what material is currently painted onto a surface, simply start the ‘Paint’ tool, then Tab select the surface (face region).

Revit will produce a tooltip showing the currently painted material, and this will also show up in the status bar at the bottom of the screen. 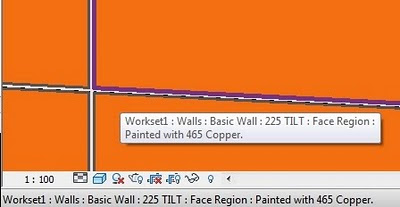 Let’s say you have hundreds of views in a Project, with some customised view sorting. How do you delete a view that you have open, without having to find it in the Project Browser?

Simply right-click in the view and go to one of the referring views (Find Referring Views). The view you were in previously will now be ‘selected’ and you can just press Delete to delete it!

Note: I recently requested that the Revit team provide a ‘Find in Project Browser’ command to quickly browse to a view (or family or group, for that matter) in the Project Browser.

Here is a brief how-to on creating a large, high resolution rendered Revit walkthrough (or sun study) and then subsequently compressing and uploading it to Youtube.

Below is an example of a 1000 frame rendered animation we recently produced at Dimond Architects. It started out at about 1.2 gb, then VirtualDub compressed it to around 225 mb, then Movie Maker compressed it to about 20 mb.It took about a week for one workstation to produce this:

Steve Stafford has posted about a highly detailed guide related to family creation.

“The purpose of the Revit Model Style Guide is to define Autodesk guidelines and standards for model creation in Revit® Architecture, Revit® MEP, and Revit® Structure.”

Have a look at the post over at Revit OpEd.