In previous versions of Revit, a common workaround to generate some ‘depth’ in elevation views was to use transparent mass planes.  This created an effect like this:

Here is what was actually happening behind the scenes: 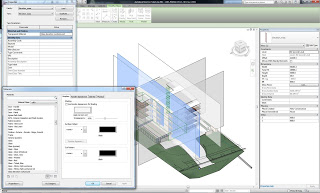 However, something has been changed in Revit 2012.  This no longer works properly.  In fact, you CAN open up a 2011 file that has the effect in 2012 – and the effect will remain.  However, if you purge the file, it simply disappears!  See example video of this ‘Disappearing Act’ and file download link below:

The only way I have been able to retrospectively ‘add’ the effect to 2012 is:

If you want to follow the discussions on this issue, here are some forum links:
http://forums.augi.com/showpost.php?p=1130343&postcount=41

Let me know if you have any comments or workarounds for this.

If you don't use masses it's easy!!!
Use glass instead!!!
See this for other (truer) ways to get nice elevations as well… http://cad-vs-bim.blogspot.com/2010/10/are-revit-elevation-views-leaving-you.html

Thanks for the link.

However, the 'Mass' method was useful because Masses are generally off-by-default in most views.

Your 'Glass Obstructor' method tends to rely on Worksharing being enabled – but a lot of our projects do not have Worksharing enabled.

Comment from Bruce on AUGI forum copied here:My testing shows there are a couple of potential causes:1. Revit 2011 and Revit 2012 handle materials differently.– The purge wanted to eliminate the my custom Material created for my mass objects.– The purge also wanted to eliminate the Property Set that (in 2012) would be the source of the Material.2. For some reason, my masses become opaque in elevation view after the purge – but there IS a work-around. The work-around is to adjust the size of the masses slightly in plan view. This forces a regen which makes the masses translucent… Read more »

Here is a response via Autodesk Support:

"Thankyou for bringing this to our attention.

I have successfully reproduced the issue you mentioned by purging the unused familes and parameters from the project.

I have noticed that if you deselect the glass materials from the purged unused list the transparency does not disappear.

I will be forwarding your file to the Development Team including your threads from the various forums along with my findings.

I will keep you posted on any updates I recieve from the Development Team.
…"