Do you want to join the Revit User Experience team and you have very specific experience in construction modeling?  Autodesk asked me to post the message below the bar:
You are an expert in modeling for construction. You pursued this career path because you are energized by complex problems, passionate about getting the details right, and convinced that technology can shape our environment. You are a designer at heart. You are able to lead and also follow. You want to work collaboratively with a team of equally committed, talented, and driven professionals.

If this is you, we’d like you to consider joining our team as a user experience designer for Revit, focused on modeling for construction. Don’t worry if you’ve never written a line of code or designed a software application, if you are the right candidate, we can teach you what you need to know user experience design.

Are you excited by this opportunity? If so, you can review the full position posting here. Please send a statement of interest and resume to chris.yanchar@autodesk.com. Want to wow us? Send us a link to some work of which you are really proud and tell us about your role in making it real. 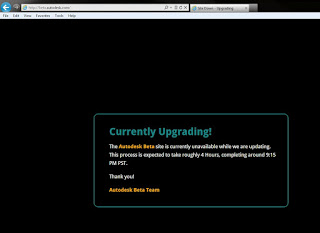 via
Site Down – Upgrading

The Autodesk Sync component does not upgrade properly under the following conditions:

To replace the two entries of Autodesk Sync by the appropriate single entry of the Autodesk Sync component, follow these instructions:

Steve Faust from Revolution Design (of Keynote Manager and Selection Master fame) has set up a page allowing you to put your hand up for Beta testing. Check it out at:
Revolution Design – Beta Testing

Some of the principles employed by the Windows development team are no doubt similar to those faced by Autodesk, as they develop Revit.  Check out some of the quotes I found most interesting (and my thoughts in red):

We chose the ribbon mechanism, and to those that find that a flawed choice, there isn’t much we can do other than disagree. (Autodesk has also gone ‘All-In’ with the Ribbon)

While there are a lot of opinions, the one thing we know is that the satisfaction with our products that use the ribbon is much higher and the usage much broader and deeper. We also know a very small set of people remain unhappy. That was true in versions before the introduction of the Ribbon mechanism, though obviously for different reasons. It might be the case that no matter what we do, there will be a small set of people that are not satisfied? (I’m sure both Microsoft and Autodesk hope that it is a ‘small set’ that are dissatisfied with ‘most’ users satisfied, and not the opposite.)

When we kicked off this blog, the premise was a dialogue – a two-way conversation about building Windows 8.  (I like the concept of using a blog or blogs to drive discussion and development of Revit.  I recommend ramping up the Mosaic Project, adding User ratings for blogs, Wish List submissions and polling.) … Windows 8 is about maintaining those roots while moving forward in a big and new way. … First, we’re talking about a product used by a billion people. No matter how you slice it, that is going to create a very, very large number of perspectives and customers to serve. … this blog is the “talk of the town” here in Redmond. 🙂

Beta 6 is available at:

I have previously posted about the ElumTools add-in but now it looks like they are going to release the add-in for public beta.

Please join us in the FREE public beta period and try ElumTools for yourself! This is our Beta Sign Up page where you can tell us you are interested in participating in our public beta for ElumTools…
Lighting Analysts, Inc.

Here are some links: