Did you know support of Sketchbook Designer is coming to an end? Check this out: 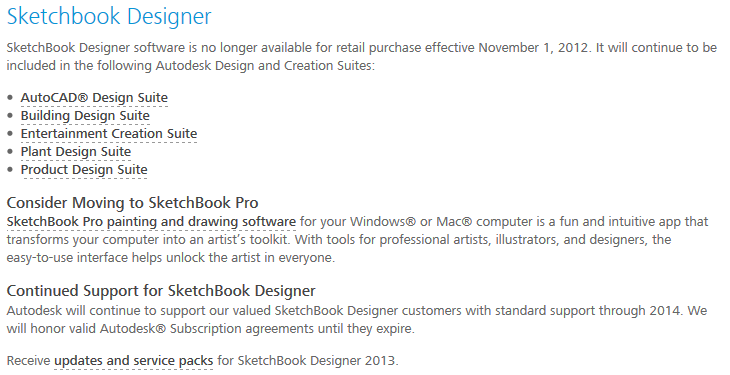 I guess the story is a bit like Impression 3, and to a lesser extent Design Review 2013 – Sketchbook Designer 2014 is the last official version.

This option in Sketchbook Pro 6.2 will launch Designer 2014

Sketchbook Designer (not Pro) can export vector formats such as DWG – you can also have Vector or Raster layer types:

Why do you compare it to Design Review? As far as I know it isn't going to the graveyard!?

Because Design Review hasn't been updated since 2013 – Autodesk is focusing on more "cloud" methods than further development of Design Review.

Is there a big difference between Sketchbook Designer version 2013 and 2014? I have 2013 version and want to know if I need to update.

Do you think is possible to get Sketchbook DESIGNER for mac or windows now? Whatever version.. it doesn´t matter.. I need it and i can't find it anymore, I'm going crazy looking for it.

If you have the Suite media for 2014, you could install it from that? You can also download Sketchbook Design 2012 and 2013 using the Autodesk Virtual Agent What Revit Wants: Use Virtual Agent to download Individual Autodesk Installers that work with Suite Licenses. Strangely enough, I couldn't find the 2014 version on there…