In a highly detailed and well-researched article, Daniel Davis tracks the use of the term “parametric” in mathematics and follows it into computer software, including Digital Project and Revit Technology Corporation.

Quote:
Parametric has a long history in mathematics and the earliest examples I can find of parametric being used to describe three-dimensional models comes almost one hundred years prior to Moretti’s writings. One example is James Dana’s 1837 paper On the Drawing of Figures of Crystals (other examples from the period include: Leslie 1821; Earnshaw 1839) [2].
End quote 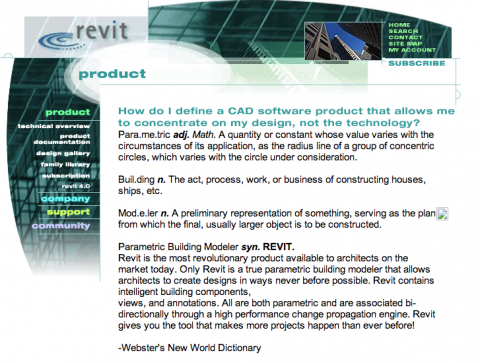 On the cost of change and Pro/ENGINEER, quote:
And the cost of making design changes ought to be as close to zero as possible. In addition, the traditional CAD/CAM software of the time unrealistically restricted low-cost changes to only the very front end of the design-engineering process.
Geisberg quoted in: Teresko 1993, 28
End quote

Well worth a read:
http://www.danieldavis.com/a-history-of-parametric/